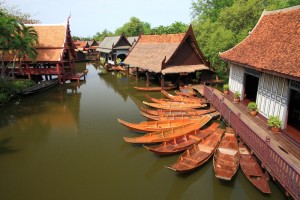 Dating back to the Neolithic civilization situated at the modern-day UNESCO World Heritage Site in Ban Chiang, the history of Thailand is long, proud, and fairly well documented.  Over the early centuries of the Common Era, tribes of Mon, Khmer, and Tai peoples established realms within the borders of modern Thailand; the Mon speaking Buddhist civilization of Dvaravati in the first millennium giving way to the Khmer empire of Angkor by the turn of the second millennium.

Thailand, the only Southeast Asian nation never to have been colonized by European powers, is a constitutional monarchy whose current head of state is HM Bhumibol Adulyadej. A unified Thai kingdom has existed since the mid-14th century, and Thailand was known as Siam until 1939 when it officially became the Kingdom of Thailand.

The Situation
Thailand is a source, transit, and destination country for human trafficking.

Source
Thai and hill tribe women and girls are trafficked to Japan, Malaysia, South Africa, Bahrain, Australia, Singapore, Europe, Canada and the United States for sexual and labor exploitation. 1  Many women are girls are trafficked by international criminal syndicates. 2  Many Thai are lured to Taiwan, Malaysia, the United States, and the Middle East by labor recruiting agencies and are forced into involuntary servitude because of the high debt owed to the agencies. 3

Within the country women were trafficked from the impoverished Northeast and the North to Bangkok for sexual exploitation. However, internal trafficking of women appeared to be on the decline, due to prevention programs and better economic opportunities. Women also were trafficked to Japan, Malaysia, Singapore, Bahrain, Australia, South Africa, Europe, and the United States chiefly for sexual exploitation but also for sweatshop labor. Men were trafficked into the country for commercial fisheries and farm, industrial, and construction labor. Prosecution of traffickers of men was complicated by the lack of coverage in the law. 4

Transit
A number of women and girls from Burma, Cambodia, and Vietnam transit through Thailand’s southern border to Malaysia for sexual exploitation primarily in Johor Bahru, across from Singapore. 5  Anecdotal evidence also points to an increase in trafficking of foreign migrants for sexual exploitation. Burmese, Khmer, Lao and ethnic minority girls/young women have been reported trafficked in border areas and into major urban centres and sometimes through Thailand to third countries such as Malaysia, Japan and destinations in Europe and North America. 6

Destination
Thailand is a destination country for men, women, and children who are trafficked from Burma, Cambodia, Laos, People’s Republic of China, Russia, and Uzbekistan for sexual and labor exploitation. 7 Children are trafficked for commercial sex and forced labor in begging, fishing, and fish processing. Sometimes entire families were trafficked for forced labor in sweatshops. 8  Many Burmese victims voluntarily migrate to Thailand and are later coerced into work in agriculture, factories, construction, commercial fisheries industries, begging, or as domestic servants. The ILO and a government university reported that fishing, construction, commercial agriculture and domestic service are the industries with the most documented migrant workers in forced labor, including children. 9  In September police raided a shrimp processing factory in Samut Sakhon and found more than 100 Burmese workers who had been held on the premises against their will. The traffickers were loosely organized small groups, with Burmese, Laotian, Cambodian, and Thai individuals who transported victims along the Thai border for forced labor. 10

Internal Trafficking
Thailand is a country with internal trafficking of women and children for commercial sexual exploitation, and labor trafficking.

The above information gathered from